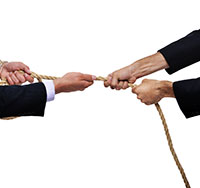 It is easy to understand why a corporate client might ask her lawyer to sit on the board of directors. The lawyer may have worked closely with the corporation’s founders to create the company, and will have a solid understanding of the corporation’s objectives, its relationships with industry partners, suppliers, customers and others, and the challenges it faces in the marketplace. It is also easy to understand why a lawyer might be honoured by, and readily accept, such an invitation.

However, sitting on a client’s board can be problematic for a number of reasons – from both the lawyer’s and the corporate client’s perspective. The following is a very brief introduction to a few of the problems that can flow from a lawyer’s decision to sit on a client board, and some suggestions for avoiding them.

Problem: From an insurance perspective, a Ontario lawyers considering sitting on a client’s board need to be aware that LAWPRO’s mandatory insurance program extends coverage only to the provision of “professional services” as defined in the policy (lawyers outside Ontario should check with their own insurer). Acting as a corporate director does not fall within the definition of professional services.

Prevention: A lawyer who sits on a corporate board should ensure that he or she is
covered under a Directors’ and Officers’ liability coverage policy, and/ or an Outside Directors’ Liability policy.

Potential for conflicts of interest

A common source of claims against lawyer-directors is conflicts of interest. A lawyer who advises not only the corporation but also another party – for example, an individual corporate officer whose interests may diverge from those of the corporation – is in a conflict position. The following scenarios may help to highlight some of the
possible conflicts that arise in these situations:

Prevention: Conflicts problems tend to creep up on the unaware. A lawyer’s best
defence is to continually ask him or herself the question “who is my client?” If the answer is ambiguous – or there is more than one right answer – the lawyer cannot afford to ignore his or her instincts, and must terminate the working relationship with one (or both) clients. Unfortunately, it may then be too late to undo the damage. Conflict problems can arise at any point in a working relationship, making this issue fairly intractable (and thus dangerous) from a liability perspective.

Potential for loss of solicitor/client privilege

Problem: Sometimes a lawyer is invited to sit on a client’s board so that he or she will be available to provide legal advice about company matters. While this arrangement is convenient, it does not reflect the traditional context for the provision of professional legal services. The duties and role of a corporate director and the director’s responsibility to the shareholders do not overlap neatly with the duties of a lawyer to a client. A lawyer sitting on a corporate board will be expected to consider non-legal issues and to comment
on business (non-legal) directions and decisions.

Where an individual provides legal advice, business advice, and mixed legal-andbusiness advice to a board or to its members, the statements made may NOT meet the established legal tests for solicitor-client privilege. While a lawyer can attempt to set up the conditions for the client’s later assertion of privilege (for example by saying, on the record, something like “speaking, now, in my capacity as legal counsel”), that attempt may not always be determinative, and the client may lose the benefit of privilege for certain communications.

Prevention: A lawyer who chooses to act as a director can attempt to distinguish legal advice from business discussions by causing the record of meetings to reflect the distinction. The lawyer might also, if asked for legal advice during board proceedings, advise that he or she “will get back to” the asker, and then do so in a context more consistent with lawyer-client communications. Neither option is foolproof, and the lawyer would do well to formally advise the client of the risk of loss of solicitor-client privilege that board participation poses.

Potential for loss of ability to represent client

Problem: Related to the foregoing discussion of communications during board meetings is a separate risk: the risk that being a party to those discussions might trigger the eventual termination of the lawyer-client relationship. Consider the scenario in which board proceedings – observed by a lawyer – lead to eventual litigation. If the lawyerdirector is called as a witness in those proceedings, he or she could easily become a party adverse in interest to either the company as a whole or to other individual directors. As a
result, the lawyer would lose the right to represent the corporate client (and the corporation would lose its counsel).

Prevention: Though rare, this contingency is likely not preventable.

In conclusion: lawyers who choose to sit on clients’ boards may be motivated to do so for very generous and practical reasons; however, the risks may outweigh the benefits so provided to the client. These risks are not only risks to the lawyer, but in many cases, to the client as well. Our advice: think carefully, considering the interests of all parties, before agreeing to sit on a client’s board of directors.

This article by Nora Rock, corporate writer & policy analyst at LAWPRO, appeared in the January 2012 corporate-commercial issue of LAWPRO Webzine. All LAWPRO Magazie and Webzine articles can be found at www.lawpro.ca/magazinearchives