Wellness & Balance: Are you a “maximizer” or a “satisficer”? 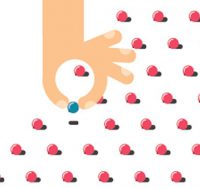 The last time you bought a house or searched for a rental apartment, how did you choose, and how did you feel about your choice afterward?

Psychologists studying the relationship between how we make choices and our life satisfaction have found that those who put the greatest effort into making choices are rewarded with less happiness.

In his book The Paradox of Choice, Dr. Barry Schwartz, a professor of psychology from Pennsylvania sorts decision-makers into two broad categories. “Satisficers” settle promptly on the first option that meets their basic criteria, while “maximizers” take considerable time canvassing and comparing all possible options in a quest to make the optimal decision.

Though the categories themselves are distinct, most people don’t fall squarely into one camp. We all have decisions we agonize over. Lawyers, however, may fall more consistently into the maximizer group because they tend to score high on measures of skepticism and perfectionism. Skeptics are quick to doubt that an item will live up to the sales hype, and may feel compelled to investigate reviews and ratings. Perfectionists, especially professionals accustomed to being held accountable for performance at a high standard, may develop similarly high standards for the goods and services they consume. These factors can lead to a refusal to accept anything perceived as “good enough” or “second best.”

But from a life satisfaction perspective, it turns out that making “good enough” choices makes us happier overall.

Studies comparing the actual (rather than perceived) quality of choices made by maximizers and satisficers have shown mixed results, which suggests that decision quality does not necessarily improve as the effort spent making it increases. What’s worse, the process of comparing all available options can provoke anxiety since many items don’t lend themselves to direct comparison.

Consider an apartment search. Each of the apartments that a maximizer considers might be “optimal” according to separate standards: one may be largest, another may boast the best location, and yet another may possess a special desirable feature. Faced with hard-to-reconcile choices, maximizers get increasingly frustrated, setting themselves up for disappointment with their eventual choice. Dr. Schwartz and his colleagues Sheena Iyengar and Rachael Wells demonstrated this effect in a study (Iyengar, Sheena S.; Wells, Rachael E. and Barry Schwartz; “Doing Better but Feeling Worse Looking for the ‘Best’ Job Undermines Satisfaction”; Psychological Science; vol. 17 no. 2; February 2006) of the job search results for 548 college graduates. While the students identified as maximizers secured jobs that paid, on average, 20 per cent more than the satisficers did, when questioned about their satisfaction with those jobs, the maximizers were significantly less happy. In fact, Dr. Schwartz’s research reveals that maximizers experience more depression and are less satisfied with their lives overall.

Maximizers don’t intentionally pursue disappointment; they may tell themselves that they are trying to make responsible use of money and time. But according to Psychology Today author Marina Krakovsky, “ though maximizers are more likely to be perfectionists, on average maximizers are only slightly more conscientious than the rest of us… [I]nstead, the Big Five personality trait they score highest on is neuroticism.”

If you’ve recognized maximizer tendencies in yourself, is there anything you can do to fret less over decisions and feel more satisfied? Here are some strategies:

Above all, remember that the “perfect” choice is almost always an illusion, and that the pursuit of it won’t lead to happiness. Put away the spreadsheet of pros and cons, and learn to embrace the freedom of “good enough.”