The first lawyer profiled is Ernst Ashurov, an experienced criminal lawyer who also handles selected litigation matters. He was called to the bars of Ontario and New York State in 2000 after graduating from the Faculty of Law at Queen’s University, with undergraduate studies at Moscow State University. Ashurov, who serves clients in English, Russian, and Hebrew, has appeared before all trial and appellate levels of court in Ontario and before the Federal Court of Canada. He has had significantly impaired vision since childhood, and has been functionally blind since 2006. 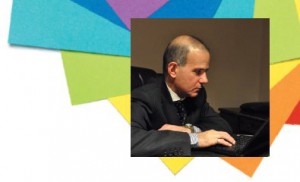 On an early vocation
Growing up in the former USSR (now Baku, Azerbaijan), Ashurov was forced to cope with discrimination due to being blind and Jewish, in a country where human rights were not respected. He decided early in life that he wanted to be a lawyer so that he could stand up for others against injustice. Getting into law school required a good academic foundation, so at age 13, he traveled to Moscow to study at a school for the visually impaired. After graduation, he spent two years studying law at Moscow State University before immigrating to Canada via Israel.

Once in Canada, he worked as a legal assistant before being admitted to law school at Queen’s University. “Growing up, being a lawyer meant, to me, being a criminal lawyer. Under communism there is no private property, so there was no civil litigation or corporate law in the sense that we have here.” But even after a Canadian legal education, Ashurov knew he wanted to be in the courtroom.

How he copes with his vision loss
Although Ashurov is functionally blind, he doesn’t mention his impairment in his marketing materials or website, and some clients don’t realize that he can’t see even after meeting him in person. “I don’t hide my vision loss, but I don’t advertise it, either. I let people make up their own minds about my competence.” He has found, however, that Canadians (including those who came here from Russia) are less likely than the Russians of his childhood to equate a visual impairment with a cognitive deficit. His interactions with opposing counsel have also been comfortable, especially once he has gotten to know his regular opponents. In court, however, he makes some adjustments: since he can’t see facial expressions or tell when a judge is making notes, he asks in advance that the judge interrupt him when necessary. “I also never attend court without my assistant – my wife of 25 years. If the judge looks confused, displeased, or distracted, I get an elbow to the ribs.

“On being “an inspiration”
Ashurov acknowledges being called an inspiration by some, both within the legal profession and in his personal life, but he believes that it goes both ways. “Positive feedback inspires me back. One of the best things about Canada is that it is possible to succeed here on your merits. People will give you respect if you earn it.” And he credits his wife, Irina, with making his work possible: “I would never have achieved the success that I’ve had without her help.”

He also admits that he has been motivated, in no small measure, by defiance. He long ago rejected the suggestion that being blind exempted him from making a contribution to society. The same impulse to defy expectations has driven his efforts in the martial arts: Ashurov is a second-degree black belt in aikido, and has also studied judo, kung fu and karate. “With martial arts, you need to be in the moment, and you need to be creative. It requires focus, which is a refreshing break from work, and relieves stress.” More than just exercise, Ashurov says that his martial arts studies have instilled values that he carries with him to work: discipline, honesty, honour, and courage.

You can read about the technological supports Ernst uses in our article Tools and Strategies for Lawyers with Vision Impairments.