A major Bay Street firm has notified us that its address and postal code are being used in a lottery scam. It does not appear the firm’s actual name is being used.

The firm became aware as several scam letters were “returned to sender”.

Sample documents from the scam appear below and it appears to work as follows. The notice from “Communication Lottery Sweekstakes” is mailed to a target (7 people known so far) in the US. The letter includes a cheque meant to be used to pay “taxes, handling and shipping fees”. The person receiving it is to call a number (647-707-1046) and identify themselves and would presumably be instructed to cash the cheque and direct funds to certain accounts before the bank figures out the cheque is bad. The cheques seem to be stolen and use the names of real U.S. companies.

Here is a copy of the letter and a fake cheque (click to enlarge): 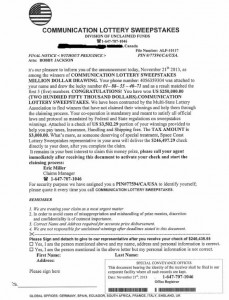 As with other cases of firms or lawyers being impersonated to further a fraud attempt, there isn’t much that can be done to prevent it. However by posting this information we hope that anyone in the public being targetted will spot the scam if they do a Google search and find this blog.