An Ontario lawyer informed us that a letter on his name on forged letterhead had been sent to UPS to demand that a client’s mail deliveries be diverted to another address. While his name appeared on the letterhead, the firm name and other contact details were fake. UPS was suspicious and managed to track down the real lawyer and bring it to his attention.

It’s not clear if this is a one-off fraud attempt or what the exact aim of the scam is. We’ve seen other instances of lawyer names or firm names being used to further online fraud attempts, many times without the real lawyers ever being aware of it. There isn’t much lawyers can do to prevent their names being improperly used like this, but they should be aware that it does happen.

Here is a copy of the letter (with the names blacked out). It’s safe to assume not many legitimate lawyers would use a “hushmail” address. The phone number is unlisted and the firm mailing address also doesn’t exist. The re-direct address is to a suite at the same steet number at another UPS address. Click on the image to enlarge it. 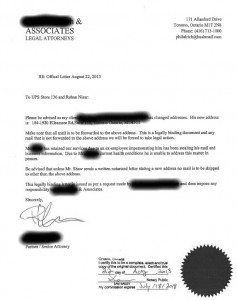