Paths to Success: ‘Experiment and be open to opportunities when building your career’

The second lawyer profiled is Katherine Koostachin, who practices Aboriginal, environmental, and natural resource law with Toronto boutique firm Willms & Shier. A graduate of the University of Ottawa Faculty of Law, she also participated in the Intensive Program in Aboriginal Lands, Resources & Governments at Osgoode Hall Law School. She completed a clerkship with the Pueblo of Isleta Appellate Court in Albuquerque, New Mexico and an internship with the Aboriginal Litigation Management Group at the Department of Justice, the former Indian Claims Commission, the Canadian Human Rights Tribunal, and the Department of National Defence Ombudsman’s Office, Legal Unit. Koostachin articled with the University of Ottawa Community Legal Clinic. 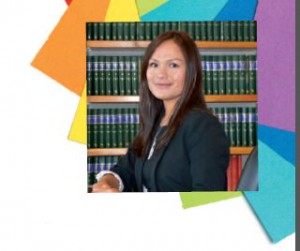 On her journey to becoming a lawyer
Koostachin grew up on a reserve in Attawapiskat, and went to high school in North Bay. After working in the Canadian Forces, she joined Canada World Youth, an international development organization. She had always wanted to travel and see the world. She found that she adjusted easily to work in developing countries (including Cuba and Guatemala), in part because the “third world” conditions she encountered − like problems with access to clean water and sanitation systems, and lack of other infrastructure − were not far removed from the conditions in Attawapiskat. “I adapted easily,” she says. “And I found that local people quickly became comfortable with me.”

Koostachin also felt free, when traveling outside Canada, to define her own identity. Outside Canada, she was unhampered by others’ culture-based preconceptions about her. She returned to Canada with newfound self-awareness and confidence, and a determination to make the transition from grassroots development work outside her own country to a more strategic, policy-based focus on improving the lot of people in Canadian Aboriginal communities.

While studying international development and political science at the University of British Columbia, she was urged by a mentor to consider law school.

On practicing Aboriginal law
While Koostachin enjoys practising Aboriginal law, it’s not her only area of practice. “There’s this automatic assumption that if you’re Aboriginal, you will practice Aboriginal law. I know some lawyers with many years of experience in, for example, Bay Street corporate commercial law, and even they report that people automatically assume that they specialize in Aboriginal law. But Aboriginal law – in the sense of, for example, the interpretation of treaties − is a fairly narrow area.” People living in Aboriginal communities, she explains, have the same legal needs as everybody else: they need representation in family, personal injury, criminal, and commercial law. Lawyers looking to give back to their own communities can make a difference by serving these general legal needs.

Koostachin’s own work includes supporting consultation with members of Aboriginal communities about new resource development projects on their lands. “The Crown, Industry, and Aboriginal communities need to engage with each other, but there are profound differences about how each party operates when it comes to addressing Aboriginal consultation issues.” For example, “at times Industry may treat an Aboriginal consultation matter as just another business transaction hurdle to go through, but this can be problematic. Corporations have to remember that they are not dealing with another corporation, but communities with diverse backgrounds, history, social, cultural and economic needs. This in part, is also why the Crown needs to take a more proactive approach on dealing with otherwise complex consultation matters. From the Aboriginal community’s perspective, real engagement means to be regarded and treated as an equal to be able to make resource development decisions and building a relationship that means more than just a business partnership.” This is not an easy task, but Koostachin works to mediate and explain each party’s perspective to the other to help resolve and move consultation issues forward.

Her advice to new lawyers? Be open to opportunities
This kind of active “cultural translation” is far removed from the career Koostachin imagined while in law school. “I expected to be working in policy development. That was where I saw myself. But here I am, in private practice.” When asked what advice she’d give to new lawyers, Koostachin recommends being open to opportunities, even when life takes you in an unexpected direction. “Experiment and be flexible,” she says. “Don’t pigeonhole yourself, and don’t let anyone pigeonhole you. There are many different ways to make a contribution.”