Paths to Success: ‘Find Yourself a Champion, Then Pay it Forward’

Dania Majid became one of the founders of the Arab Canadian Lawyers Association (ACLA) after she was called to the bar, building on her experience in establishing the Arab Law Students Association at Osgoode Hall Law School. While carrying a full-time caseload at the Advocacy Centre for Tenants Ontario, she represents ACLA on the Equity Advisory Group (EAG) of the Law Society of Upper Canada, and organizes the Toronto Palestine Film Festival. 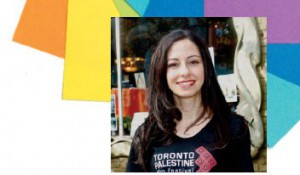 On co-founding ACLA
Majid was a law student at the time of the September 11, 2001 attacks in the USA. The increase in anti Arab sentiment and rhetoric that followed those events created an uncomfortable climate at the law school. “There were relatively few Arab students, and we were feeling isolated.” She responded by founding the Arab Law Students Association, and in the school years that followed, students would approach the association’s booth on club days, grateful for the reminder that they weren’t alone.

After graduation, Majid realized there was little organized support for Arab members of the profession or legal resources for the Arab community, and so she co-founded the Arab Canadian Lawyers Association (ACLA) with other lawyers, most of whom were in the early years of their career. “We soon found,” she says “that more senior lawyers of Arab heritage were willing to support us and get on board with ACLA.” While an early aspiration to create a specialized legal aid clinic was stymied by lack of funding, ACLA now serves as an important bridge between Toronto’s Arab community and the profession, offering a lawyer referral service, information about legal aid, legal workshops and general legal information resources.

Mentors help lawyers handle culture-specific challenges
Besides providing resources for the public, ACLA matches new lawyers with experienced mentors who can offer insight into what law practice is like for Arab lawyers. “Research from the Law Society and others suggests that minority lawyers face additional challenges in getting into law school, getting articling jobs, and getting jobs after graduation.

But the events of 9/11 and the ongoing conflict in Palestine add an extra layer of difficulty for Arab lawyers. New grads were asking questions like ‘should I avoid mentioning my volunteer experience on my resume, since it was with Arab community organizations?’” This kind of decision, Majid notes, is a matter of personal choice, but being able to discuss challenges with more established practitioners can arm new lawyers with strategies for overcoming discrimination. Majid credits her own mentors with helping her handle her own career transitions, for example, the move into clinic practice.

On her commitment to advocacy
While Majid has the sense that, at least in major centres like Toronto, anti-Arab discrimination may be abating somewhat, it tends to resurface in response to media coverage of events in the Middle East. ACLA seeks to improve the lot of all Arab lawyers by participating on EAG and the Diversity Committee of the Toronto Lawyers Association and presenting Arab lawyers’ perspective on reports and policies affecting equity-seeking legal professionals, in order to address discrimination and inequities within the profession. “We know – for example, from the 2010 Ornstein report – that racialized women have a harder time than any other category of lawyers: they have access to fewer articling positions, struggle to find full-time jobs and end up in lower-earning practice areas. Some are even forced into sole practice when that would not have been their natural inclination.”

In addition, ACLA also seeks to advocate on behalf of the broader Arab community in Canada by commenting on laws and policies that affect the community. This includes, for example, hosting lectures and roundtables, as well as preparing “backgrounder” packages for the Ontario and Federal governments and for the media on foreign policy matters and position papers on domestic laws.

It’s time-consuming work, explains Majid, who also tends to be very busy every year organizing and programming the Toronto Palestine Film Festival. Issues like the Palestine conflict are very complex, and “of course, there is incredible diversity in the Arab population internationally and here in Canada. There are many issues that are important to the community and it’s a challenge to address them all.” However, Majid believes that as the Arab legal community grows, so too will the number of Arab lawyers who can help serve the community.

Her advice for new lawyers
Majid believes that new lawyers can access valuable support through membership in cultural legal associations. However, building individual relationships is also very important. “Talk to everyone and anyone in your areas of interest,” she says. “Networking has become something of a cliché, but if you are trying to build a career, do whatever it takes to find a champion who believes in you and who will speak up for you.” And once you’ve made it? “Pay it forward.

Remember where you came from and who helped you along the way, and be willing to give back to your community and do the same for the lawyers coming along behind you.”