How long should you keep your closed files? 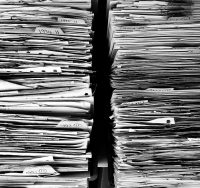 “How long do I have to keep my closed files?” is one of the most frequent questions lawyers ask practicePRO.

Certainly you don’t have to keep all files permanently – this just doesn’t make practical or economic sense. Nor is the solution as simple as a one-size-fits-all rule for when to destroy closed files (e.g., toss everything at 10 years). For many reasons, file retention and destruction is a complex issue. This article examines why and provides some direction on how long you should keep your closed files.

Why keep closed files?
There are a number of reasons to keep your closed files. Some benefit your client, others benefit you. One of key reasons is to defend yourself against allegations of malpractice. A well-documented file is often the best defence, especially if it contains evidence of the work done on a matter. Sometimes there will be no other source for that information. On many malpractice claims the lawyer and client will disagree or have different recollections on what was said or done – or not said or done.

Credibility is a critical factor for defending malpractice claims and LAWPRO finds claims are difficult to successfully defend if the lawyer has not made efforts to include written or electronic correspondence, notes on personal or phone conversations and other documentation in the file. Clients usually have very specific recollections of what was said or done, and lawyers frequently have little or no recollection of what happened on a specific file.

Remember that most clients are involved with few legal matters in their lifetimes and are thus more likely to remember the specifics of what happened. Most lawyers will handle hundreds
or even thousands of legal matters, making it more difficult to remember the specifics of individual files. When it comes down to credibility, judges often prefer clients with specific memories over lawyers with limited or no memories. This is why the information in a closed file becomes so important and why you should not underestimate the importance of a well documented file.

For these reasons, LAWPRO encourages lawyers to ensure that files are well documented and handled in accordance with appropriate file closure, retention and destruction procedures. Consider the consequences of having no file available in the event of a claim:

Of course, in reporting a claim matter under the program, the lawyer is obliged to co-operate with LAWPRO in the investigation and defence of the matter, including production of his or her file, to the extent that it then exists. Lawyers with excess insurance are encouraged to check with their excess insurers to determine their requirements and/or applicable policy terms.

How long do you keep closed files?
The news here is good and bad. The good news: In most cases, probably not as long as you might think. The bad news: In some cases, perhaps longer than you might think. The trick is figuring out what you can destroy after a reasonable and appropriate period of time and what you should keep for a bit longer.

A file retention policy can provide direction to firm members on what the firm’s standard file retention period is and help lawyers identify the files that should be kept for a longer period of time. A good starting point for trying to answer the question on how long to keep closed files is LAWPRO’s data on how long claims take to surface (i.e., an allegation of malpractice is made or circumstances arise that make it appear as if a mistake might have been made).

Categorized by major areas of law, the chart below (click to enlarge it) shows the years between the error date (the date the work was done) and the reporting date (lawyers are obliged to report real or potential errors to LAWPRO as soon as they are aware of them) for 22,241 claims reported to LAWPRO between 1997 and 2007. 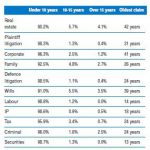 The chart does not include data from more recent years, as many claims files opened in those years are still open and that data would not reflect a true cross-section of reported claims. The good news appears in the first two columns: In most areas of law, the majority of claims arise in less than 15 years, and in some cases less than 10 years.

The caution column is the percentage of claims that arise beyond 15 years, in particular for real estate, family, and wills and estates claims. The bad news appears in the oldest claim column – some claims take a long time to make themselves known.

The ultimate limitation does not run if a person with a claim is incapacitated or is a minor and is not represented by a litigation guardian with respect to that claim. The ultimate limitation also does not run if the person who the claim is against conceals that claim or wilfully misleads the person with the claim. There are also exceptions in other legislation. See s. 19 of the Limitations
Act, 2002 for a list of these. Where applicable, you should also keep in mind relevant limitation periods from other provinces or under federal legislation. Note that in some cases there are no
limitations on environmental claims.

Thus, based on LAWPRO ’s claims data, and the ultimate limitation period in the Limitations Act, 2002, 15 years is probably a good starting point as a general rule. But it is not a strict rule that can or should be followed in all circumstances. (And as an aside: Should it be 15 years plus six months? Remember that after a statement of claim is issued you have six months to serve it.) Lawyers must consider a number of factors and make at least some decisions on a file-by-file basis. In many cases the 15-year general rule will apply, but in some cases files should be kept longer than 15 years.

Setting a file destruction date
When a file is closed, the primary lawyer on that file should set a file destruction date, taking into consideration that a general rule— which does ensure some consistency and direction — won’t necessarily work for all files. Personal judgment by the lawyer on a file by file basis is necessary. The lawyer should consider ethical, legal and professional considerations. These tend to be strict rules and many of them are unbending. The lawyer should also consider economic and practical factors. These are really business decisions and there is more flexibility here. Ideally the lawyer can look to a formal firm file retention and destruction policy for direction.

In setting a destruction date the lawyer should consider these questions: What is the likelihood I will face a malpractice claim or a Law Society complaint on this file? Is there any other reason I might need it? The answers to these questions will vary depending on:

When should you keep a file for more than 15 years?

Consider the above factors, especially if your clients are under a disability or are minors. Family law matters are more likely to come up beyond 15 years, often because issues relating to post-secondary school tuition and expenses come up in this time frame, and the amount of spousal support seems to be an issue that is revisited.

As people often own a property for more than 15 years, holding your real estate files for at least this long makes sense. Original wills and will notes should be kept much longer than 15 years.

A side note on the ultimate limitation period
When the Limitations Act, 2002 was proclaimed in force on January 1, 2004, many lawyers hoped that s. 15 of the Act would provide immediate protection against claims arising from legal services performed more than 15 years before the claim was made.

By reason of this judgment, it appears that undiscovered claims based on legal services rendered on or before January 1, 2004, will be barred by 5.15 only as of January 2, 2019. As we move through 2019, legal services provided throughout 2004 will begin to be shielded from claims by s. 15. Claims for services rendered throughout 2005 will come under s. 15’s purview through 2020, and so on into the future. In the meantime, s. 15 appears to be of little practical importance.

This article originally appeared in the December 2010 issue of LAWPRO Magazine. All past issue of the magazine can be found at lawpro.ca/magazine