Sale of the Matrimonial Home in Family Disputes 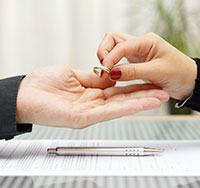 The following is an e-bulletin from the Law Society of Upper Canada sent on Sept 27, 2016.

Lawyers are often approached by spouses involved in a family law dispute who are seeking joint representation with respect to the sale of a matrimonial home.

Before accepting a retainer to act for such spouses, a lawyer must determine whether he or she is permitted to accept the retainer pursuant to the Rules of Professional Conduct (the “Rules”) and, if so, what steps are required to ensure compliance with his or her professional obligations.

Section 3.4 of the Rules deals with conflicts of interest and joint retainers. A conflict of interest exists when there is a substantial risk that lawyer’s loyalty to or representation of a client would be materially and adversely affected by the lawyer’s own interest or the lawyer’s duties to another client, a former client, or a third person (rr. 1.1-1, 3.4-1[1]).

If a lawyer decides to accept the joint retainer for the sale of the matrimonial home, then, prior to accepting the retainer, the lawyer must advise each spouse that

A lawyer who represents one of the spouses in a family law dispute should not act for both spouses in the sale of the matrimonial home because of the potential for a serious conflict of interest developing.

A lawyer who accepts the joint retainer must act in the best interests of both spouses. The lawyer cannot prefer the interests of one spouse over the other. In addition, no information received in connection with the matter from one spouse can be treated as confidential as far as the other spouse in the joint retainer is concerned. The lawyer has a fiduciary duty to protect both spouses and to disclose all relevant information to both of them.

Furthermore, if the lawyer is acting for both spouses and a dispute arises between them as to the manner in which the closing proceeds are to be distributed, the lawyer may not distribute the proceeds in a manner inconsistent with the instructions of both of them. In such a situation, the lawyer should not pay out any portion of the proceeds without the written consent of both spouses or without a court order.