Wills: Why you should send clients detailed reporting letters 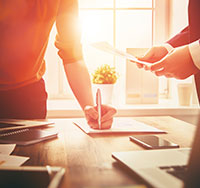 While the will itself is the product of the collaboration between lawyer and client, the reporting letter serves a separate purpose: it’s the record of the context. To the extent that the reporting letter documents the process of crafting the will, it can bolster validity, shield the lawyer from malpractice allegation and demonstrate the value that legal advice brings to the task.

Reporting letters from wills lawyers are sometimes brief and perfunctory. But they shouldn’t be.

Among the biggest challenges in estates practice today is defending a will against allegations of undue influence. Successful influence-based will challenges can not only doom a will, but can also leave the drafting lawyer open to a negligence claim.

Challenges based on undue influence can be tougher than those alleging incapacity, because in capacity challenges, at least there are medical experts available: most elderly testators are under a doctor’s care. Where a challenge alleges undue influence, however, the estate can struggle to produce evidence that supports the testator’s autonomy. A well-drafted reporting letter can be a source of such evidence.

Lawyers who draft wills regularly are alert to the possibility that clients may be subject to pressure to prepare one. While it’s not unusual for an elderly client to be accompanied to a law office for an appointment, the attendance of people other than the client can be an initial red flag, which may or may not be followed by others (for example, a request to amend or redo a recent will; difficulty articulating reasons for requested changes; large gifts to recent caregivers; etc.).

In the presence of such indicators, lawyers typically employ safeguarding strategies such as insisting on meeting with the client alone, or asking detailed questions about reasons for changes. Notes about taking these steps should be documented in the lawyer’s file, and can be reflected in the reporting letter, for example: “I asked you why you decided on unequal shares for your four children, and you stated that you would like to give Marina a 40 per cent share because, as the only child of yours who lives nearby, she has provided you with considerable help and comfort over the past 15 years;” and/or “Marina drove you to my office, but you arranged the appointment on your own initiative, and you and I met alone to discuss the changes you wanted made to your will.”

A reporting letter can also head off claims against the lawyer for failing to advise the client about matters that may not be referenced in the will at all.

The most common example is with respect to beneficiary designations. Where the testator had an insurance policy or workplace pension plan for which she was required to designate a beneficiary, the reporting letter might read: “you advised that you have a life insurance policy through your employer, Acme Co. As I explained at our meeting, the proceeds of this policy do not form part of your estate. You agreed to contact the HR department at work to ensure that Bob Smith is designated as the beneficiary of that policy.”

Finally, where a lawyer gave advice that the testator opted not to follow — for example, a recommendation to create a separate will for assets not subject to probate — the reporting letter can reflect this choice.

If the time required to draft a detailed reporting letter for each will seems prohibitive, lawyers should consider developing a checklist which can be completed during the intake interview, and incorporated into a reporting letter. This will serve the dual purposes of reminding the client of his or her own responsibilities (for example, “you agreed to contact [executor] to let her know where you will store the will”) and as a record of the lawyer’s taking of steps (“we reviewed the share certificates to ensure that the shares are held in your own name”).

As DIY will preparation services continue to proliferate, a lawyer’s expert efforts to shield the will against future challenges will emerge as the key value-add that justifies lawyers’ fees. The time spent drafting a detailed reporting letter is a solid investment.

This article by Nora Rock (Underwriting Counsel at LAWPRO) originally appeared in the February 14, 2018 issue of The Lawyers Daily published by LexisNexis Canada Inc.