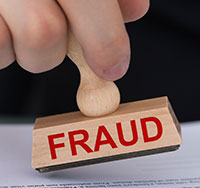 See the Toronto Star article for the photos:

Investigators say the owners of a Toronto property were out of the country on business in January 2022 when two people used fake identification to impersonate them.

Acting as the real homeowners, the suspects hired a real estate agent and managed to list their property. The property was eventually sold and new homeowners took possession.

The actual owners returned to Toronto several months later to find their home was listed and sold without their knowledge.

Police have released photos of the two suspects wanted for fraud over $5,000.