Malpractice claims regarding wills double in a decade 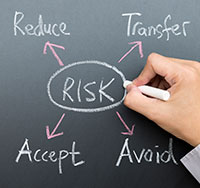 While wills and estates may never rival litigation or real estate as a risky practice area for lawyers, LAWPRO has seen the average annual number of wills claims double over the past 10 years. Growth in property values renders these errors more expensive and growing complexity in family structures, family law and tax law makes… Read More »

Contingency planning for lawyers: Do you have a plan in place for your practice?

LAWPRO encourages lawyers to consider the impact that their unexpected death or incapacity would have on their practices, and to implement a plan to ensure that their clients continue to be served. The following article provides a good overview of issues lawyers should consider when making contingency plans. It originally appear in Hull & Hull… Read More »

In a previous issue of LAWPRO Magazine, we asked our claims counsel about what they feel are the biggest malpractice hazards in each area of law based on the claims files they work on every day. Here is an excerpt from that article urging lawyers to consider capacity when drafting a will. Click here to… Read More »

Want a challenge-proof will? Think like a (wannabe) beneficiary

As a lawyer, you have likely been trained to maintain a laser focus on your client’s interests and how to express and defend them. Being a fierce advocate is usually a good thing. But when preparing a will for a client, it can be a useful exercise, once you have a good first draft, to… Read More »

There are not many guarantees in life, but this is one of them: If you proofread – properly – each and every will you create, you will substantially reduce your risk of a malpractice claim. Proofreading well is a highly underrated, non-universal skill. However, since lawyers proofread documents on a regular basis, most have a… Read More »

Will-drafting is an area of legal practice that demands extremely careful attention to detail. Decisions in this area make it clear that even where a will is well-drafted and is consistent with the testator’s known intentions, failure to have the will executed in accordance with the applicable legal formalities will render it invalid. When that… Read More »

When a lawyer passes away while still in active private practice, LAWPRO’s run-off coverage kicks in. While standard run-off may be enough coverage for lawyers who have been retired for several years (since potential claims will have had time to develop), it may not be sufficient for a lawyer who was practising full-time at the… Read More »

The New Rules of Practice for Estates: An Overview

I. AN OVERVIEW (by Suzana Popovic-Montag*) On July 9, 2015, several amendments to the Rules of Civil Procedure¹ (the “Rules”) were filed with the registrar under the Courts of Justice Act². These amendments, which came into force as of January 1, 2016, include various changes to the practice of estates under Rules 74 and 75…. Read More »